Before getting on to explanations of rising land costs, I wanted to follow up the last post with some more detail, this time focusing on the UK only.

The research I discussed last week uses a standardised methodology to disaggregate house prices into structural and land prices in 14 different countries, but in the UK (and at least some of the other countries) we also have some official statistics that shed some light on this (but which don’t give exactly the same results due to differences in data sources and methodology).

The Office for National Statistics publishes data on the total estimated value of the UK’s housing (£5.5 trillion in 2015) and of the value of the dwelling structures only (£1.8 trillion). Implicitly, the remaining £3.7 trillion is accounted for by the land under the homes (and gardens, garages and anything else within residential plot boundaries).

By cobbling together various ONS datasets (and with the kind help of Brian Green) I’ve managed to trace these figures back to 1957. Here’s the estimated average value of a UK home, disaggregated into structure and land values and adjusted for inflation.

According to these figures the average value of a UK home was £192,040 in 2015, of which the structure accounted for £62,610, leaving a residual that we assume to be ‘land’ of £129,430. In 1957 these component figures were £15,890 and £8,350 respectively. By the way, if the average value of a UK home of just under £200,000 seems low to you, remember that this figure covers the entire housing stock, and the homes that are actually sold in any particular period are generally of significantly above-average quality and therefore value.

Obviously incomes have also risen a lot over this period, and one way to adjust for that is by calculating the total value (across the whole dwelling stock) of housing structures and housing land as a percentage of national GDP, as below.

Looking only at the period since 1957 gives the impression of inexorable growth in residential land values, but as Knoll et al’s Figure 7 in the previous post shows the 1950s were a low point for land values across developed countries as a whole, being roughly three-quarters of the level seen at the end of the 19th century. 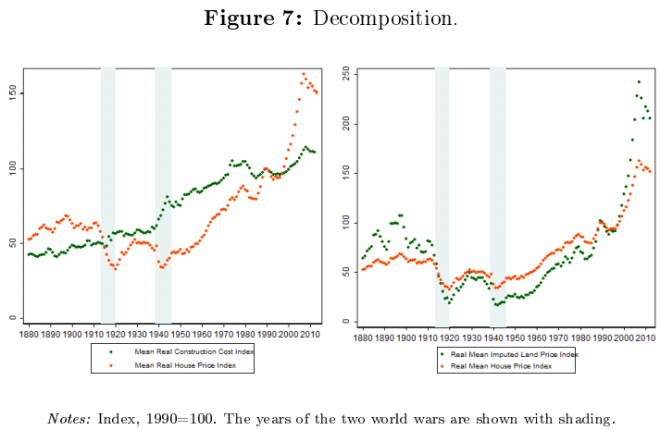 That picture is backed up by a separate series of estimates of urban land rents as a share of national income in England and Wales, compiled by Hans Singer (before his days as an international development economist), reported by Colin Clark in his book ‘The conditions of economic progress’ and charted below.

According to Singer’s estimates, the income from urban land rose from 1% of total national income in the 1840s to a peak of 4% at the end of the 19th century, which makes sense when you consider the extraordinary pace of urbanisation in England and Wales at the time. But while urbanisation carried on over the next few decades, the share of urban land rents in national income actually fell. In the next post in this series, I’m going to look at why that happened.

9 thoughts on “Historical housing and land values in the UK”